DENMARK: Ml-tek A/S have sponsored four young men as they begin an 8000 km trip from Denmark to Gambia, to raise money and awareness for the "Ride to Education" charity. 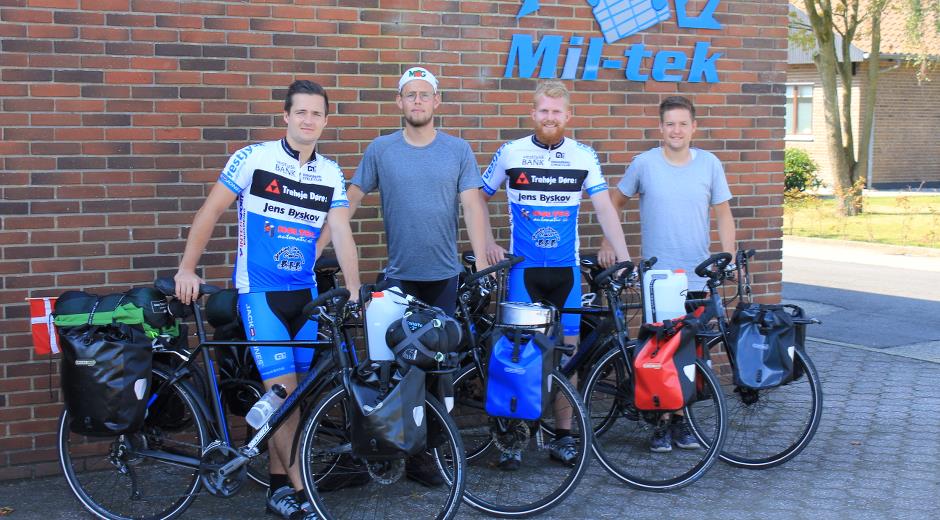 Kristian, Anders, Sune and Jakob. Four young Danes who have set off on a gap year holiday. The plan is to travel across Europe and down into Africa.

It probably all sounds fairly standard so far, except that these intrepid adventurers have decided to do the whole thing by bicycle.

And, what’s more, is that they are doing it for a charitable cause.

"Ride to Education" is the initiative, and for these young men it will entail an 8000 km journey from Denmark to Gambia. As they set off on their adventure, they stopped by the Mil-tek Headquarters in Ulfborg, Denmark to give us the low-down on the whats, the hows, and the whys of their adventure.

We wanted to travel - we're at that age. And we didn't want to do the same thing everyone else is doing. Then we started think about ways to do it cheaper when someone suggested doing it by bike.

That's when we realised we could raise money for charity at the same time.

So you're not cyclists?

No! We joined the local cycling club this summer to start training but otherwise no - no specialist training done.

Tell us about the route.

We will travel down the west coast of Denmark, into Germany, and then on Holland, Belgium, France, possibly Andorra, Spain across into Morocco, and then Western Sahara, Mauritania, and Senegal before finally arriving in Gambia.

What technology have you and how are you planning the route?

We have two GPS devices. We will plot it out day-by-day. We hope to travel around 90km every day, and every fourth day we will take a break. That is, until we get to the mountains... It might get a bit tougher then!

What other technology have you for the trip?

We have our phones, an iPad, and two cameras to document the trip.

How much gear and food will you carry with you at any given time?

It will depend on the region we are in. In the Sahara, we will have to think 2-3 days ahead and carry lots more water but here in Europe we can probably plan 1 day ahead. Hopefully, we have all the repair parts we will need...

Who's the engineer among you?

All of us! One of our sponsors is a bike shop, who gave us each 10 hours of repair courses so we know the basics. But let's see how much we remember when we're in the middle of the dessert...!

What about crossing borders by bike?

Well, we can travel straight through the whole of Europe on our passport, and travel down into Africa. We need a visa for Mauritania, but we have that. Hopefully, they won't baulk at the idea of 4 crazy young guys cycling across their country!

Did you pack any good luck charms?

Just each other.... Oh, and a Danish flag! We're hoping that it might make us a few friends - and maybe find us a few places to stay - as we travel further south.

What if you meet a millionaire in France who offers you a shortcut by boat. Will you say yes?

No!! We will tell him he can spend his money on Ride to Education.

Is there any one thing you are planning on doing in every country?

Drink a beer! Nah we haven't planned that much. We have different cities we want to visit along the way, and we also want to spend some time in Morocco. But other than that we will see where the route takes us.

And what happens when you reach Gambia?

We will spend two months there as volunteers, working on the education project. We will help with building the school, and also teaching in the primary school - work which is already underway. There is also a football club.

When you travel back, will you bring the bikes?

It depends on how they look I guess!

We have a friend at home who will be updating Facebook with anything we send her. so keep an eye out to see what we're doing!

And if any one would like to support the Ride to Education cause?

The Ride to Education team consists of Kristian Rystok Bisgaard, Anders Stokholm Nybo, Sune Rahbek Thuesen and Jakob Trabjerg Kamp.  They were in conversation with Mads Skannerup and Darragh Groeger.