Mil-tek is pleased to announce it has been awarded with a new 3-year ISO14001 certification. It is a certification Miltek have proudly held since 2008, and hope to hold long beyond 2017. 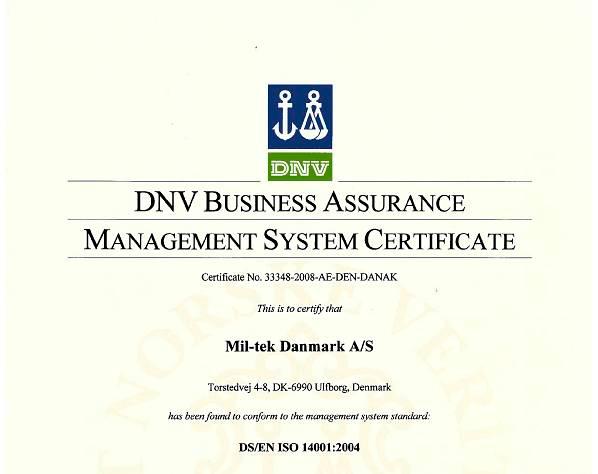 Last week, Mil-tek was delighted to be awarded with a new 3-year ISO14001 certification. It is a certification Miltek have proudly held since 2008, and hope to hold long beyond 2017.

Once the certifcation was complete, the Marketing Department spoke with Ib Jensen, who carried out the inspection at Mil-tek.

Can you tell us a small bit about you, your role and background?

My name is Ib A. Jensen. I originally studied as an engineer but have been working with DNV for the last 14 years. My main task is to audit companies across Denmark, and make sure that they adhere to the standards required of them, in the areas of regular environmental issues, working environment and health & safety. DNV is an independent company that has no other function than to audit organisations. In essence, this means that we do not provide systems or software to use. This is a policy we have in order to stay as fully objective as possible, and avoid having other interests than reviewing whether companies achieve the standards for which they apply.

You must have seen a lot of change during that time...

Absolutely. DNV merged with GL (Germanischer Lloyd) to become DNV GL. This means that we have become one of the world’s three largest organisations within this field of work. Today DNV are represented in more than 130 countries worldwide, and given their wide span of auditing, shipping & offshore is the largest market for them.

What is the biggest challenge firms face nowadays?

Over and over again, when companies take the decision to achieve DNV standards, and be approved for ISO9001, 14001, 18001 or whatever, the biggest challenge is to have the board on-board, to live by these standards. It has to start from the top-down, meaning that in order for the board to expect employees to live by it, the board itself must provide a massive workload themselves to implement the changes required on a daily basis.

Is there one change that all organisations should make but have not?

The future seems to be, that once a company is certified for one of the ISO standards, and if the company will benefit from this, they should decide to apply for one of the other standards. For instance when Mil-tek are looking to become ISO9001 certified, all the work done to be ISO14001 certified will help making the implementation a lot smoother.

How receptive are Danish organisations to ongoing standards improvement?

Due to the fact that companies are not obligated to be ISO certified, but have actively chosen to pursue this, then they are quite open to this, as it effectively keeps their systems updated, rather than having a system that is simply aging and continuously not improving it.

What has your experience been of Mil-tek?

Generally speaking, I have had a good impression of Mil-tek and the employees here, who all have showed a high level of engagement with the system. Everyone has been very open-minded when it comes to potential improvements in all aspects of the organisation. In addition, the fact that Mil-tek’s products are designed to improve the environment; it has a positive effect on employees as they think about the environment as an integral part of their work.

You visit many organisations; what there anything in particular that you will remember most from your time here?

There is a massive potential in Mil-tek in terms of incorporating the physical site analysis or site-survey for larger international customers to do the calculations, as that is going to shed light on how much the Mil-tek products genuinely help to improve the environment, as the tools for these calculations are already in place.

*Please note: this conversation was conducted in Danish. Whilst every attempt has been made to ensure an accurate translation, natural variations will occur.